If you’re looking to get outdoors and run off some energy with the kids, then set your sights on Fagan Park. Part of the Hornsby Shire Council, this beautiful park has 55 acres of land just waiting to be explored. You’ll find some fabulous playgrounds, bike paths, a museum and plenty of gardens for kids of all ages to explore.

Fagan Park has been described as “the crown jewel of Hornsby Shire’s parks” – and it’s easy to see why. Covering 55 hectares of land, whether you’re walking, pushing or rolling, there’s plenty to cover. The park was once home to the Fagan family and you can even visit their original homestead at Netherby Cottage. Here’s what you’ll uncover on a day of exploration.

Getting to Fagan Park

There are two car parks at Fagan Park. One is off Arcadia Road and the other off Carrs Road. It is $6.00 to park all day and they both have plenty of car spaces so you never have to worry about not finding a spot.

There are two playgrounds at Fagan Park. The biggest playground is at the top of the park (by the Arcadia Road car park). It features:

There is also an array of sheltered seating, BBQs and picnic tables. The electric BBQs cost $1 to use, and are perfect for birthday parties and family gatherings. Book a few weeks in advance, as they are quite popular. Find out more about booking a shelter for a party.

Alternatively, they also have tables that can seat up to six people and you don’t need to book for those.

There is also a pop-up cafe cart near this playground (open weekends) and toilets nearby. The pop up cafe by the top playground

The other playground is at the lower end of Fagan Park, close to the Carrs Road entry. It’s a smaller playground, but still has plenty to offer. There’s a large nature play area, lots of swings, a climbing structure and small slide.

It’s surrounded by grass and near the new Board Walk, with nearby toilets and picnic tables. Fagan Park also has bike tracks for adults and children to ride their bikes, skateboards or just go for a walk or jog. Grassy areas are also plentiful for picnics or a friendly game of footy or soccer. The park is a great spot to walk your dog but they must remain on the lead at all times, and it’s a good idea to bring a water bowl for them, or they can just drink from the drops of the tap.

Netherby Cottage is the original homestead of the Fagan family, and you can even take a look inside. It’s open for visitors on Tuesdays between 10am and 4pm, and the second Sunday of every month between 1:30pm and 4pm. You can also organise a self-guided or guided tour of Netherby Cottage by contacting Hornsby Council.

The Cottage also has a museum next to it with a packing shed and a milking complex. The museum also had tools, machinery, tractors and everything the family needed for farming when they lived there during the 1900s.

The Eco Garden is a great way to teach children how to be environmentally friendly, with everything from recycling to composting to worm farms. They even have workshops that are held regularly throughout the year.

The Eco Garden is also community run by volunteers and has 36 different types of fruit and vegetables, local native plants and their own herb and mint garden. If you would like to find out more about the workshops and when they are held, it’s all on the Hornsby Shire Council’s What’s On page. It’s got everything you need to know from, how to be eco-friendly workshops to recycling and even how to save energy and electricity.

The Gardens of Many Nations

The Garden of Many Nations, covers 10 hectares of the park and has 11 themed gardens including English, South American, North American (which has disabled toilets next door disguised as a log cabin), Dutch, African and Mediterranean Gardens, They are so well kept and look absolutely beautiful. They also have a lake area with an amazing water view which is often used for weddings and is home to many different types of ducks. Please don’t feed the ducks and swimming is not advised.

So come and spend the day at Fagan Park it’s a very scenic beautiful drive and you might even be lucky enough to spot some horses along the way. Carrs Bush is an easy walk for little legs and prams. Located within Fagan Park (near the Carrs Road carpark), Carrs Bush is 8.5 hectares of networked short trails, exploring through many parts of a forest.

With easy, level trails along with interpretive signage, Carrs Bush is perfect for families.

The park was adopted as Council’s bicentennial project and was officially opened in November 1988.

For more information download A History of Fagan Park.

If you’d rather pick up a coffee, snacks or lunch on your way to Fagan Park, there are many eateries only a short distance from the park at Galston Village, such as:

Rachel Chappell is the Founder & Publisher of North Shore Mums, your go-to for advice, support and inspiration for parenting, mumlife, and kids’ events on Sydney’s North Shore. She's a mum of three daughters.
All Posts »
PrevPrevious10 funny memes about supermarket shopping in lockdown
NextPlaydates are back! New ‘friends bubble’ for kids 18 and underNext Cafes in garden centres and plant nurseries around the North Shore 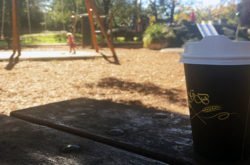 North Shore parks and playgrounds near a cafe. Two minutes to coffee!