Vanuatu: How an Aussie mum and her young kids survived Cyclone Pam

A few weeks ago, on Friday 13 March 2015, a Category 5 cyclone made landfall in Vanuatu. According to the World Meteorological Organisation Cyclone Pam’s “maximum speed was more than enough to lift an airplane” when it hit Vanuatu’s capital, Port Vila. Australian mum Sally Baker and her two children were there.

At 1am on 14 March Sally Baker was in the ballroom of the Holiday Inn Resort Vanuatu. She sat in the dark watching her children, Oscar (6) and Matilda (3), sleep. Her husband Chris was in Australia. Outside, Cyclone Pam was ravaging Vanuatu’s capital Port Vila with sustained winds of 250 kilometres per hour and wind gusts of up to 320 kilometres per hour.

The decision to take refuge at the Holiday Inn was made at the last minute. Sally had booked the room “just in case”. Then the day before Cyclone Pam made landfall, she packed the essentials: “passports, Frozen books and chocolate” and moved in.

When the storm hit there were 200 guests and staff barricaded in the Holiday Inn’s ballroom. Inside, mattresses and stacked chairs were pushed against the windows, and outside the windows were covered with cyclone shutters. The hotel didn’t know if these precautions would hold against the cyclone, but it was the best they could do.

To keep the crowd entertained some movies were put on and eventually Oscar and Matilda fell asleep. At around 10.30pm the wind picked up and it didn’t stop for six long hours.

“It was pitch black, and all we could hear was banging and cracking all around us,” says Sally. “It sounded like giants moving furniture. The overwhelming feeling was entrapment.”

Somehow Sally’s children slept through the noise. Sally, meanwhile, spent the night with her sneakers on, ready to pick up Oscar, then Matilda, and run for the underground kitchen.

The winds subsided by 4.30am and guests were allowed to return to their rooms, if they weren’t damaged. Sally was lucky enough to have one of the undamaged rooms.

When the sun rose the devastation was obvious. The landscape was completely changed, Sally explained. You could see for miles because the trees were gone. Boats had been washed into houses, building debris was everywhere and the Holiday Inn, which just a week before won Best Hotel/Resort at the Vanuatu Tourism Awards for Excellence, was a disaster zone.

Sally let her husband and family in Australia know she and the kids were safe. Then she called her housemaid, Nicole. Nicole had decided to shelter at Sally’s Vanuatu home rather than go to a crowded cyclone shelter. She answered the phone in a panic” “Roof gone, I’m scared.”

Nicole had spent the night huddled in a cupboard under the stairs of the two-storey brick house. With her were her sister and seven of their children, including one-year-old Matilda (named after Sally’s daughter). During the night a large section of the roof blew free. It flapped about in the wind, crashing and banging into the house. The noise had been deafening.

Without the roof’s protection the house started to flood. Water ran down the stairs and into the cupboard in which Nicole and her family were sheltering. At one point they were standing in six inches of water, in complete darkness, while the cyclone lashed around them. 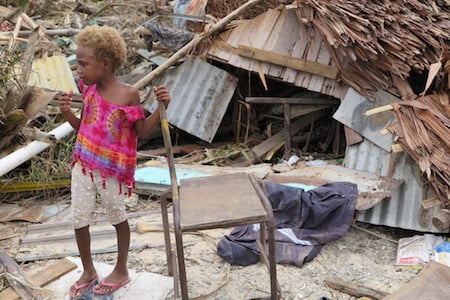 Cyclone Pam left an estimated 65,000 people in Vanuatu in need of shelter, including Nicole and her family whose home was completely destroyed. Crops, livestock and fisheries, which are relied on for food and income, were extensively damaged, and an estimated 110,000 people were left without access to safe drinking water. 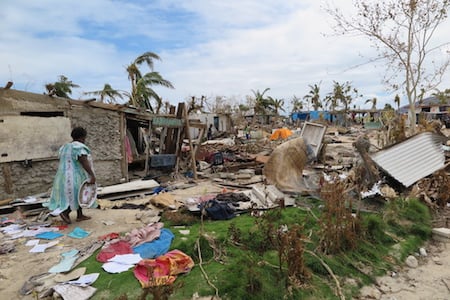 Despite this devastation the staff at the Holiday Inn continued to turn up for work. The hotel management had offered their staff paid leave to help clean up the community and rebuild, yet unexpectedly, breakfast continued to be cooked and fresh towels provided to guests.

Across the country the cyclone destroyed agriculture and infrastructure. Ensuring access to food, clean water and sanitation is now the focus, particularly in more remote regions. But the country is starting to rebuild. Nicole and her family have already reconstructed their house. Sally’s house has a temporary roof and she will soon move back in with her family.

While Oscar and Matilda talk about being sad, they seem to be coping well. They understand that some of their belongings were damaged by the storm and need to be thrown out; they can see the changes around them and are showing their resilience.

To recover, however, Vanuatu needs your support. Tourism accounts for approximately 40 per cent of the country’s GDP, and a third of its employment. Cyclone Pam has therefore had a horrific impact on the economy.

Some of Vanuatu’s islands, including the largest Espiritu Santo, were relatively unscathed and are welcoming tourists. So when you’re planning your next holiday, please consider an island getaway in Vanuatu. And, if you’re not planning on travelling but would still like to assist the communities devastated by Cyclone Pam, please visit CARE Australia.

All photos courtesy of CARE Australia. 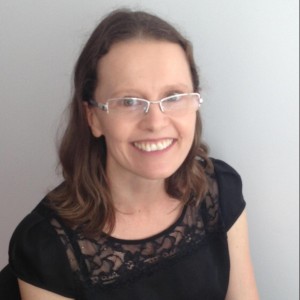 Justine Atherton is mum to two cheeky girls (3 and 18 months). She lives in Hornsby and is passionate about words and story-telling.
All Posts »
PrevPreviousNSM Review: Sydney Royal Easter Show 2015
NextLook at what we've been doing: Kindy Kids St Ives!Next