Through the excitement of trying for a baby and adding to your family, miscarriage is usually the furthest thing from your mind – let alone a second trimester loss. Yet it happens. More often than we like to think. And it takes time to grieve the loss and process the painful feelings that come with it. North Shore Mums writer Jen Yang shares her story of pregnancy loss and her support for the new law that recognises pregnancy loss with compassionate leave for grieving parents.

I’ve never had to explain the inconsistencies in my resume over the last couple of years, partly because I’ve learnt to gloss over that period in my interviews now as “work lifestyle changes due to maternity leave (since we now have a 2.5 year old) and relocation from Sydney to the Central Coast”. Thankfully, I’ve managed to push through with my career (freelancing). But the truth is, we have suffered two mid-term pregnancy losses, both at 19 weeks (19w3d, and 19w6d exactly), between late-2017 and 2019. I was the 2/100, two times over… only a statistic.

Being 19 weeks, both our losses couldn’t be registered as stillbirths. This meant we not only couldn’t recognise our babies’ deaths on the NSW Registry of Births Deaths & Marriages, we also had absolutely no support in terms of bereavement or parental leave. I remember feeling so insignificant for not being able to recognise our grief formally, and also worried about how stopping work to heal would impact us financially.

After our first loss, we were able to take a significant amount of time off. Our tickets and leave had been booked for our babymoon initially, we then found out about the loss one week prior to leaving. It was a month-long escape and we took the time instead to grieve, recover, reconnect and heal. Returning to society, and the ‘normal’ workplace in general after such a trauma was incredibly hard.

For our second loss, we were just one day shy of the arbitrary 20 week gestation mark. A mere 24 hours, which would have meant either me returning back to work as soon as I was physically able, or taking the much needed time off as bereavement leave to recover.

Not many people know or speak about this – I know we certainly didn’t when it was happening to us – but a second trimester loss involves hospitalisation and the induction, labour and birth of your baby. The only difference is, we left the labour wards without a child in our arms. Post hospitalisation, going home involved heavy postpartum bleeding for anything between 1-2 weeks. Often a mother will lactate after a few days, which happened to me both times, then there’s the funeral arrangements for the cremation/burial of your child, as well as the excruciating task of updating of everyone you’ve already told of your news.

Looking back, that time off was critical as the shock takes a while to wear off. The post-partum symptoms and emotions only set in afterwards, often when you’re already back in your normal routine. Plus, there’s the “facing the world” part. The unwarranted questions, the awkward encounters, the topic triggers, and for the mother, the obvious weight and belly you still carry. Nothing could have mentally and psychologically prepared us for the real world, and we’re forever changed.

On Thursday 24 June 2021, the Federal Government introduced 2 days’ paid leave for all couples who have suffered a loss under 20 weeks’ gestation if they are employed under the Fair work act. That’s phenomenal recognition and validation for all women in Australia. Whether you’ve just started your journey, or thinking about it, it’s a fertility windfall for a very possible rainy day.

We were fortunate enough to have had a tremendous amount of support in our personal and professional lives to help us get back on our feet. This is not possible for everyone (low and single income families, families with multiple dependents and visa holders are all vulnerable) and I’m giving them a voice. Truth be told, I would have been incredibly distressed, and afraid of the burden/repercussions to ask for extra leave had I been in a job that I needed to keep. I would have probably had no choice but to return to work straight after my hospitalisation.

I’m also sharing this because I remember the shame, guilt, vulnerability, and embarrassment I felt when it was time to face the world, so it’s time to raise awareness and speak out.

Personally speaking, the advertising industry (Adland) was/is incredibly patriarchal, archaic and very slow and resistant to move with the times. I would say, the majority of large traditional agencies in Australia don’t even have standard maternity and parental leave outside of what’s mandated by government. The passing of this law by the Federal Courts is a fundamental step towards equality in private industry where women and mothers are often told to ‘toughen up’.

In contrast, my husband Nyan had the most supportive workplace and colleagues. Despite not having a formal HR policy/personnel in place, they approached our situation with immense sensitivity and care, and gave him all the time we needed to be able to attend to my physical healing in the early days. He was also offered the space to emotionally and psychologically retreat before returning to work.

What Samantha Payne (founder and CEO) and the team at the Pink Elephants support network and partners who lobbied tirelessly for this change have achieved, is a major step forward in the right direction for all working parents and for couples on the family planning journey. Hopefully this new compassionate leave for pregnancy loss opens up the conversation in the workplace around miscarriage, stillbirth and infant loss.

Finally on the note of career and family planning, I wanted to leave this piece by saying – choose happiness and live your life your way, it’ll all work out.

Support for parents who have lost a baby

Jen with her husband Nyan and daughter Avalon

Jen is originally from Johannesburg, South Africa and now calls Sydney’s North Shore her home with husband Nyan, daughter Avalon (2.5 years) and two cats. Previously, they spent three years living on the Central Coast, but moved to the North Shore to be closer to family support and work opportunities after their losses. She believed that had she not taken the time off to heal and reconnect, they probably wouldn’t have been in the right frame of mind to start planning for our rainbow, Avalon.

Jen and Nyan are both advocates for family-first practices in the workplace. She is currently working as a freelance Senior Account Manager in the Advertising industry, and is an advocate for work flex and equal rights in the workplace for women and mothers wherever possible. 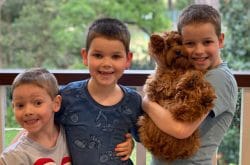