I remember my life BC (before children). I had a pretty clear identity of who I was mostly by where I spent eight hours a day (i.e. my work).

In 2012 all that changed when I was plunged into motherhood. I had no training for my new job, and no amount of reading could have prepared me for it! In hindsight, I think I focused much more on researching the pregnancy and labour/delivery and not so much on what happens after the baby is born.

It was a steep learning curve of breastfeeding, changing nappies, bathing and trying to squeeze in sleeping and eating somewhere. The thing I soon realised is that my son didn’t care how many degrees I had or how impressive my resume was. All he wanted was to be loved, to be fed and to be kept warm, clean and dry. And he made it pretty clear when something was lacking! It didn’t take too long for me to get right into motherhood. I joined a Mother’s Group, we did swimming lessons, I learned baby massage and took him to mums & bubs yoga. Fun times! 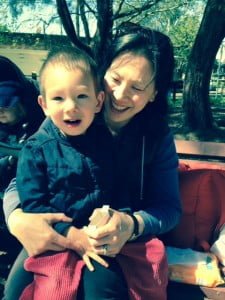 After a year, my maternity leave finished and it was time to go back to work. My boss had kindly agreed to let me come back two days a week. Whilst my work tried their hardest to accommodate me on a part-time basis, it just didn’t work out.

So I started on my quest to find a new job. Having not applied for a job for about ten years, the first challenge for me was that part time jobs didn’t seem to exist unless you already work somewhere and come back after maternity leave. However, I needed to at least try and see what was out there, so started applying for full-time positions and stating clearly in my cover letters that I actually wanted part-time.

I updated my resume and registered with SEEK and MyCareer as well as looked at government jobs and investigated specific company websites that I knew had positions similar to what I had done before. The first month involved lots of job applications and no responses. The second month involved mostly emails telling me I was unsuccessful (at least I got a reply) and the occasional call that eventuated in a rejection when they realised I wanted part time work. Towards the end of that month I figured it was time to widen the network and apply for jobs through recruitment agencies (which I had been avoiding).

After a flurry of applications on a Friday night, my phone was running hot on Monday morning from recruiters. However, most of them lost interest pretty quickly when they realised I wanted part-time work. Very few had bothered to read my cover letter – very annoying! It really started getting me down and I started to lose hope that I ever would find anything part time and I started to consider my options of either being a stay at home mum or go back to work full time.

However, I did get an interview with a major department store. They initially rejected me via phone when they realised I wanted part-time but called back a few days later as they still hadn’t filled the role. There was a frantic dash to the shops to buy a new outfit to wear to an interview. I was also very nervous about having to sell myself to a company. I went for an interview and it sounded great. One of the questions initially was ‘Why did you apply for a job here?’ My first thought ‘Because I need a job…’. However, I knew that that was not the appropriate answer and gave a stellar answer about wanting to use my skills and experience in a completely different environment (i.e. as opposed to banking and finance). They were even willing to restructure the role to be a four days per week (three at the office and one from home) position. I was really tempted to take it, but as I was working only two days before I really only wanted to work three days at a maximum. In the end they withdrew their offer as they felt that it would not be a good fit for either of us. I was devastated, thinking I may have blown my only chance to get a part time job in analytics.

However, I got another interview about two weeks later with a charity. The job advertisement was for full time or four days part-time. I figured I had nothing to lose by applying and stating clearly I wanted only three days. The interview was great and I had a good feeling about the company. They asked me at the end of the interview if I had any questions and I asked whether working three days would be a problem. The HR person responded that the number of days that the successful candidate would work was not the top priority. The main thing for them was finding the right person for the role. I nearly fell off my chair!

I got the job! I can honestly say that it is the best job that I have ever had. Granted I am not earning as much as I could be earning in a corporate environment but my priorities have changed. It is much more important to me to be able to work somewhere where I can leave at 5pm to get home to my son and for that to be OK. The actual workplace environment is lovely too.

To give you an idea, let me tell you about my first day. When I got shown to my desk, not only did I have a desk set up with a computer and all my logins working but there was also a big sign that said ‘Welcome Kim’ plus balloons and stars sprinkled all over my new desk. I have worked for over fifteen years and I have never felt so welcome on my first day on a job before. I woke up on day two and really was looking forward to going to work. I had no idea exactly what I was meant to be doing yet but I was looking forward to going there!

For me, I really needed to find a way to utilise my skills and experience, but at the same time make sure that I could spend time with my son. While I loved taking time off work when he was first born, I needed to prove to myself that I could still have some sort of a career at the same time. I love being able to put on a work hat again and be able to use what I studied at uni and utilise the experience that I had gained throughout my career. Also, I find I enjoy the days I have off much more when I spend time with my son.

In the future I have not ruled out being a stay at home mum, but I really needed to prove it to myself that part time work was possible and that it was not a full time work or no work at all trade off. My advice to other mums who are faced with this dilemma is to persevere and keep looking. There are part time jobs out there, they just take a little bit longer to find. 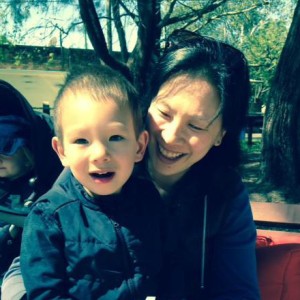 Kim Yee lives in Gordon and has a 2 year old son. She currently works three days a week at the Starlight Children's Foundation where their focus is to brightened the lives of seriously ill and hospitalised children. As their (one and only) data analyst she is thrilled to work for a company that has won awards for being a great employer and is also supportive of mums who have returned to work.
All Posts »
PrevPreviousHow to take self portraits with your children
NextHow to look younger in photosNext