Getting your family fit in 2018: Steve ‘The Commando’ Willis tells NSM how

Was your family’s New Year’s resolution based on living a healthier life? Well, fitness expert Steve Willis knows a thing or two about encouraging kids to be fit and healthy. The former The Biggest Loser trainer, and new Sanitarium Weet-Bix Kids’ Tryathlon ambassador, talks to NSM about his top tips for getting kids into shape.

As a devoted dad of four kids aged between 2 and 19, Steve Willis is a dedicated advocate for kids living happy, healthy, active lives. As partner of fellow fitness guru Michelle Bridges, Steve eats, breathes and sleeps fitness! Which is why he was the perfect choice to fly the flag for the upcoming Sanitarium Weet-Bix Kids’ Tryathlon which kicks off in February, and will tour around the country after that.

“It’s vital that healthy habits are instilled in every person from the time they are young,” says Steve. “Positive physical and mental development through activity directly correlates to our sense of self-esteem, how we deal with stress, and how we interact with others. The more as parents we can instil a love for fitness and activity in our children by encouraging them to do something like the tryathlon, the more it will benefit them in later life as adults.”

Here Steve gives us his top fitness tips for ourselves- and our kids. 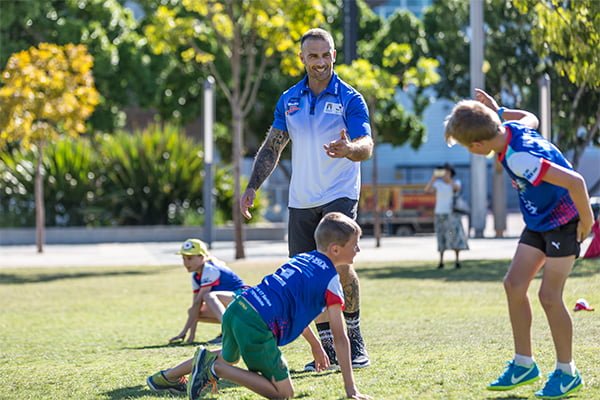 How can mums encourage kids to eat healthier food?

I believe kids eating whole foods such as vegetables, fruits, whole grains, nuts, and legumes in their natural state is always best for their nutritional needs. Research tasty recipe ideas using nutritious ingredients and just give them a go. Wherever possible I would also recommend removing highly processed foods and an excess of sugar and salt from their diets as well so kids don’t develop too much of a taste for it.

What’s an easy go-to breakfast for mums on the run?

Smoothies are great. I tend to make mine with water, a scoop of protein powder, almond meal, some fresh stuff like kale, banana or dates, and a pinch of cinnamon. Sometimes I’ll also add in some oats, it depends how I’m feeling. Occasionally I’ll make an all-green smoothie with spinach and kale which is pretty refreshing. If you’re really pushed for time I’d recommend boiling up some eggs ahead of time and popping them in the fridge. Then when you’re rushed, grab an egg, a slice of ham, and some nuts and seeds. No cooking involved!

What are your secret “always eaten” lunchbox foods?

Oh wow, I eat just about anything! However, I really like wraps made with mountain bread. I’ll add some avocado, cold meats, spinach and hot English mustard. Plus I will throw in some nuts and seeds into a lunchbox.

Is there a way to encourage more sedentary kids to exercise more?

Regularly suggest visits to parks, the beach, walks, and climbing areas – they’re all great activities for kids. However, you also need to lead by example. Many parents will take their kids to a park and drink a coffee sitting on a bench whilst their kids play. Hardly a great modelling example! If your kid is particularly sedentary it’s better to actually go on a bike ride with them, play a game of tennis together, or even set up your own mini Olympics course in the back yard with a few obstacles which you can all participate in.

What are some novel ways to get kids involved in fitness?

There’s now lots of events around that kids will love being a part of and get a kick out such as fun runs and obstacle courses. My daughter Ella, who’s nine, will soon be taking part in the Sydney Sanitarium Weet-Bix Kids Tryathlon and she can’t wait! Set out like a traditional triathlon, on the day kids first do a swim leg, followed by a cycle leg and a run before crossing the finish line. These national events are fantastic for kids – not only do they create long lasting memories and a sense of achievement, they’re also a lot of fun and set the tone for event participation in later life. You’re much more likely to have a go in an ocean race or half marathon when you’re an adult if you’ve participated in some kind of big sporting event as a kid. 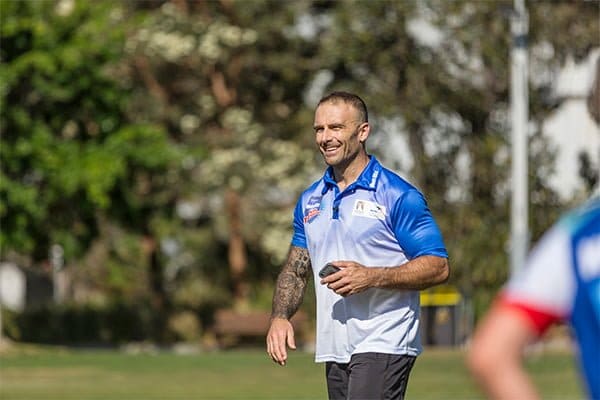 Are you for or against screen time for kids?

I think nowadays a lot of kids are too engrossed in screen time. It’s something that really needs to be limited and have set boundaries around it. One of the biggest disadvantages is that the more time you spend indoors, the less time you’re likely to spend outdoors which reduces physical activity. The other thing is that it can create such an excess of chatter in kids’ minds, which doesn’t leave much time for quiet self-reflection. It think being comfortable in stillness is important for both adults and kids because it helps you to have a better relationship with yourself.

What’s the biggest mistake mums make when it comes to ‘healthy’ foods?

Not doing enough investigation. Always read the labels on stuff to see how much salt and sugar is in something before you buy it. I looked at a yoghurt label the other day. It had 16g of sugar in it which is equal to four teaspoons! Somethings aren’t as healthy as you think.

What’s your favourite meal to make for the kids?

I absolutely love cooking breakfast. My go to meal for the family is toasted sourdough bread with butter, avocado and poached eggs followed by some fruit. However, my speciality that all my kids adore is my French Banana Toast. Blend two bananas and four eggs in a blender until it’s a thick mixture. Then dip slices of sourdough bread in it and fry in a little butter in a pan. My kids always beg me to make it for them. It’s got protein, carbs and what’s more it’s so quick and easy.

Do your kids make YOU any meals?

Ella loves to make muffins. She makes one with almond meal, coconut oil, chopped up dates, banana and apple. I love those they’re quite filling and satisfying. I tend to leave her to her own devices in the kitchen and she comes up with some weird concoctions from time to time. The other day she put some ricotta in some ice blocks she’d made which didn’t exactly freeze very well!

Do you have a ‘cheat’ food?

Ever since I was a little boy I’ve loved hot chips. Mum would ask me what I wanted to eat and I’d say, “hot chips!” so she’d get out the deep fryer. So I indulge in those now and again. I like to eat very “cleanly” and sensibly whenever I can with lots of fresh vegies, so I know having chips now and then is okay.

What’s a common dinner meal you serve up to the family?

Doing something on the barbecue is always popular. One favourite is chicken balls popped onto kebab skewers along with pieces of capsicum, pineapple and other veggies, grilled on the barbie.

How about snacks? Are there any snacks that you’d recommend (that aren’t high-sugar, pre-packaged museli bars)?

The best snack is just an old-fashioned piece of fruit. There are a lot of fruit juices you can buy which aren’t great. I always think it’s better to eat a piece of fruit instead because you’re getting fibre from it as well.

Now in its 20th milestone year, the annual Sanitarium Weet-Bix Kids TRYathlon is gearing up for its biggest year ever for 2018. Featuring renowned fitness expert Steve “Commando” Willis as 2018 National Ambassador, the series kicks off at Sydney Olympic Park, on 4 February, 2018, with other cities and towns around the country to follow. Registrations are now open here.


The Weet-Bix Kids TRYathlon series is Australia’s premier national fitness event series for kids aged seven to 15. Established in 1999, the non-competitive event is all about getting kids active whilst also having a huge amount of fun!

North Shore Mums is your go-to for advice, support and inspiration for parenting, mumlife, and kids’ events on Sydney’s North Shore.
All Posts »
PrevPrevious5 tips for saving your sanity these school holidays
NextSydney real estate update: The tide has turned!Next