There are many reasons why the North Shore of Sydney is a great place to live. One I had forgotten, but was duly reminded of, was how easy it was to visit Luna Park. Unlike other fun parks, like Wet ‘n’ Wild, the Easter Show and the rest, it is so easy to access by public transport especially if you are on the North Shore train line. When I told my kids we were visiting Luna Park, they were excited. I was excited, but for different reasons to them. For me it wasn’t about the rides and the thrills. I was looking forward to spending a fun-filled afternoon with them, just the four of us. No friends, just family.

We caught the train from Killara to North Sydney. Yes, Luna Park is in Milsons Point, but my husband works in North Sydney and since he couldn’t make it and keeping in with the family outing theme, we decided to have lunch with him before walking down to the Harbour foreshore. A Sydney landmark since 1935, Luna Park presides over arguably one of the prettiest harbours in the world. 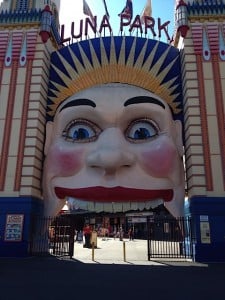 Since we visited during the April holidays when the Easter Show was in full swing, there were no crowds as we entered the clowns mouth and approached the ticket box. We were lucky to receive four Funfest tickets from Luna Park, which allowed unlimited admittance in the month of April.

The staff were friendly and helpful but had obviously not received many of these pre-paid tickets before so we were at the window for at least twenty minutes. While we waited I checked out the standard prices and they seemed reasonable, varying depending on the age and height of the children.

First port of call was the Roter. There were no lines and the kids were in. This was the case for the whole afternoon. Having lined up for forty five minutes and sometimes longer at other venues this was great. It fuelled the kids excitement and they even had two to three goes on some rides that I didn’t even dare go on once! But they did get me on a couple hair raisers and I was dubbed the ‘screamer’ for the rest of the afternoon! The only time we did wait in a short queue for a ride was for the good ‘ol Dodgem Cars. Definitely a favourite.

The dodgem cars… a favourite!

All age groups were catered for too. My kids are older (14, 12, 9) the older ones had visited with friends in the September/October holidays last year. Again, the simplicity of getting there and the location was a plus for me letting them go without an adult.

The operators of the rides were friendly and fun. One even offered to go on the Wild Mouse with a little girl who had lined up with two of her friends and no adult just so she didn’t miss out on the ride. I thought that was really sweet. 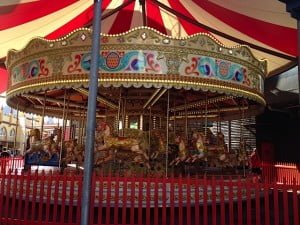 The carousel… great for the little ones

Coney Island is still as disappointing as I thought it was the last time I had visited Luna Park about four years ago. Obstacle paths and two big slides with a couple of other attractions really doesn’t cut it in that vast space. I’m sure they could do so much more.

Since we had lunch before we arrived we didn’t get to check out the food outlets except for the Fairy Floss stand. A little indulgence never goes astray. I used to love fairy floss as a kid and realized my taste for it hadn’t really changed. The difference was that little voice in my head telling me I’d need to do two extra sessions at the gym that week! One of the operators must have been new and she couldn’t get the floss onto the stick. It caused a bit of a pile up at the counter with customers waiting for their cloud of sugar, but no one was annoyed. The operators were doing the best they could. Maybe the new girl needed a little more training! 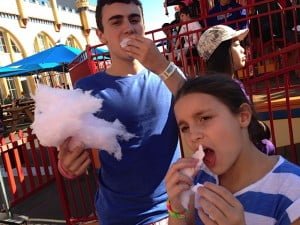 All in all we spent a great afternoon at Luna Park. You probably couldn’t spend the whole day there… we were there for three hours, and we felt like we had been on everything we wanted to. The Fun Fest Pass and the Annual Pass is probably worthwhile for teenagers who like to hang out with friends and families with younger children who need to be entertained.

For me personally, I enjoyed it and probably will take my youngest back with a friend in another holiday period this year. However, it’s definitely worth a visit as it is accessible, the views from some of the rides are beautiful and it’s just a whole lot of fun. 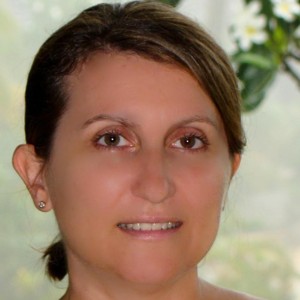 Georgie lives in Killara and is a mother of three very busy children, who after being a full time stay at home mum for fourteen years decided her skill set needed a boost. She completed a Diploma in Education via correspondence at the end of 2013 and published her very first contemporary romance novel at the beginning of 2014. She loves to read and write, spend quality time with her hubby and children, travel, catch up with friends and family and dilly dally for way too long on social media.
All Posts »
PrevPreviousIs my child overweight?
NextThree tricks to raise a creative childNext