There’s nothing better than an exciting day spent at the movies, splurging on popcorn and choc-tops, and settling in for a few hours of fun the whole family can enjoy. Wondering what’s in store for 2022? Here’s your guide to the best new kids movies out in 2022.

Grab the popcorn, buckle in the kids and head to the movies. With so many great choices coming out this year, you’re going to be making a few trips! Get planning with this handy guide to the best new kids movies out in 2022.

From director Jason Reitman and producer Ivan Reitman, comes the next chapter in the original Ghostbusters universe. In Ghostbusters: Afterlife, when a single mum and her two kids arrive in a small town, they begin to discover their connection to the original ghostbusters and the secret legacy their grandfather left behind. The film is written by Jason Reitman & Gil Kenan.

After one experiment, Johnny turns into a monster and everyone else becomes human. Now it has to be seen whether they will be able to reverse this experiment.

The Addams get tangled up in more wacky adventures and find themselves involved in hilarious run-ins with all sorts of unsuspecting characters. Sequel to the 2019 animated film, ‘The Addams Family’.

Passepartout is a young and scholarly marmoset who always dreams of becoming an explorer. One day, he crosses paths with Phileas, a reckless and greedy frog, eager to take on a bet to circumnavigate the globe in 80 days and earn 10 million clams in the process. Seizing the opportunity of a lifetime to explore the world, Passepartout embarks with his new friend on a crazy and exhilarating adventure full of twists and surprises.

To free Baba Yaga and Renfield from the clutches of Monster Hunter Mila Starr, the Wishbone Family once more transforms into a Vampire, Frankenstein’s Monster, a Mummy and a Werewolf. Aided and abetted by their three pet bats, our Monster Family zooms around the world again to save their friends, make new monstrous acquaintances and finally come to the realization that ‘Nobody’s Perfect’ – even those with flaws can find happiness.

Sequel to the 2020 live-action feature film ‘Sonic the Hedgehog’.

After a lifetime of pulling legendary heists, five notorious bad guys—Mr. Wolf, Mr Snake, Mr Piranha, Mr Shark and Ms Tarantula—attempt their most challenging job yet…going good. Nobody has ever failed so hard at trying to be good as ‘The Bad Guys’, an all-new animated feature film from DreamWorks Animation.

8. Fantastic Beasts: The Secrets of Dumbledore

The third installment of the ‘Fantastic Beasts and Where to Find Them’ series which follows the adventures of Newt Scamander.

Max has reached his goal: He is the first city rabbit ever to be chosen in the master class for easter rabbits. Now he and his friends have to find their very own super power in order to protect Easter. But then the unthinkable happens: The easter rabbits’ most powerful magical possession, the “golden egg”, turns black – meaning Easter is in great danger! Indeed, Leo, the leader of a gang of city rabbits, wants to abolish Easter and tricks a family of foxes into stealing all Easter eggs. Max’ only chance to save Easter lies in teaming up with the fox boy Ferdinand who offers his help. But can a rabbit really trust a fox?

King is unable to believe the fact that his beloved child, Princess Barbara, is all grown up. He still tries to watch over the Princess, but the 16-year-old Barbara throws a tantrum at her birthday party. While everybody is distracted, the throne is seized by a sneaky post clerk Weasel.

It has been a year since Mic Mic and Oscar returned from their incredible adventure. And now, after a diabolical plan by Vulture to sabotage the delivery of the Grizzly cub to his opponent in the American presidential elections, Mic Mic, Oscar, Panda teenager and Stork set off on another great adventure as they ride a zeppelin to return little Grizzly to its’ rightful parents, save the American elections and the whole continent from the erupting volcano.

Superman’s dog team up with a flying cat to stop crime while Superman is on vacation. It’s one of the most-anticipated kids movies for 2022!

The story of Buzz Lightyear and his adventures to infinity and beyond.

The untold story of one 12-year-old’s dream to become the world’s greatest supervillain, in Minions: The Rise of Gru.

Puss in Boots discovers that his passion for adventure has taken its toll: he has burned through eight of his nine lives. Puss sets out on an epic journey to find the mythical Last Wish and restore his nine lives.

16. Spider-Man: Across the Spider-Verse – Part One

Miles Morales returns for the next chapter of the Oscar®-winning Spider-Verse saga, an epic adventure that will transport Brooklyn’s full-time, friendly neighborhood Spider-Man across the Multiverse to join forces with Gwen Stacy and a new team of Spider-People to face off with a villain more powerful than anything they have ever encountered.

Three young women accidentally bring back the Sanderson Sisters to modern day Salem and must figure out how to stop the child-hungry witches from wreaking havoc on the world. One of the best kids movies in 2022!

Spellbound tells the story of Elian, a teenager who comes of age using her magical powers to defend her family when the opposing forces of light and darkness threaten to divide her kingdom.

The legendary Clades are a family of explorers whose differences threatened to topple their latest and most crucial mission.

One of the most-anticipated kids movies for 2022. The Super Mario Bros. animated movie is powering up with an all-star voice cast led by Chris Pratt as the iconic Nintendo character.

Flick Frankish lives on the Upper North Shore with her three kids - Cassandra (5), Vivienne (3), and Elliot (2) and husband. After studying journalism and digital media, she naturally fell into the online world - and hasn't left since! She is the Editor at North Shore Mums.
All Posts »
PrevPreviousQuestions to ask your kids about their day at school
Next10 fun ways to celebrate adult birthdays & anniversaries during Covid isolationNext 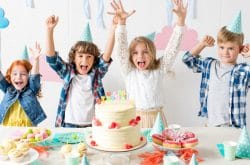